According to the usual rhythms of Oscar season, Hollywood’s awards machinery should be running at full steam right now. With Academy Award nominations set to be announced on Feb. 8, stars and industry power players should be swanning from one glamorous cocktail party and glitzy banquet to another. Contenders’ schedules should be packed with screenings, Q&As and gown fittings. Academy voters should be excitedly making their lists and checking them twice.

But these days, there is little joy in buzz-ville.

For the second year in a row, the COVID-19 pandemic has choked much of the life out of Hollywood’s all-important awards season. With movies facing what feels to many like an existential crisis and the box office for adult-oriented films all but decimated, few in the business are in a celebratory mood.

Compounding the industry’s woes, the Golden Globe Awards, which for decades have offered a crucial marketing springboard for Oscar hopefuls, were pulled off the air by NBC in the wake of months of blistering controversy sparked by last year’s L.A. Times investigation of ethical lapses and representation issues inside the Hollywood Foreign Press Assn., which puts on the awards. In the place of “Hollywood’s Party of the Year,” there was just an untelevised private ceremony accompanied by a string of often ham-fisted social media postings.

With most in-person events canceled due to the Omicron variant, awards consultants have been left struggling to find ways to drum up critically important chatter about this year’s Oscar hopefuls. The best picture Oscar race is wide-open as voting begins. Here are the pros and cons of each major contender.

“What’s missing is the conversations that happen inside rooms,” said veteran awards consultant Tony Angellotti. “You know, ‘What have you seen? What have you loved?’ That’s largely gone. And because of that, people just aren’t as engaged as they have been before the pandemic.”

Coming off a difficult year that saw Oscars ratings plummet to an all-time low, Hollywood entered this awards season with a sense of guarded optimism that things were bouncing back. Table-setting fall festivals in Telluride, Venice and New York were held in-person once again. Pandemic-delayed contenders like Steven Spielberg’s new take on “West Side Story” and the crowd-pleasing “King Richard” were back on the release schedule.

Heading into this year with a handful of Oscar hopefuls, including the Princess Diana mood piece “Spencer,” Neon co-founder and chief executive Tom Quinn felt the familiar gears of awards season starting to turn again. Quinn attended festivals in Cannes, Telluride, New York and London and warmly recalls a screening of his company’s “Memoria,” starring Tilda Swinton, at Lincoln Center’s Alice Tully Hall in October before a sold-out audience of 1,100 people.

“I remember soaking it up thinking these kinds of things are not to be taken for granted,” said Quinn, whose company scored a historic Oscar victory just before the pandemic shutdowns in 2020 with Bong Joon Ho’s best picture-winning “Parasite.” 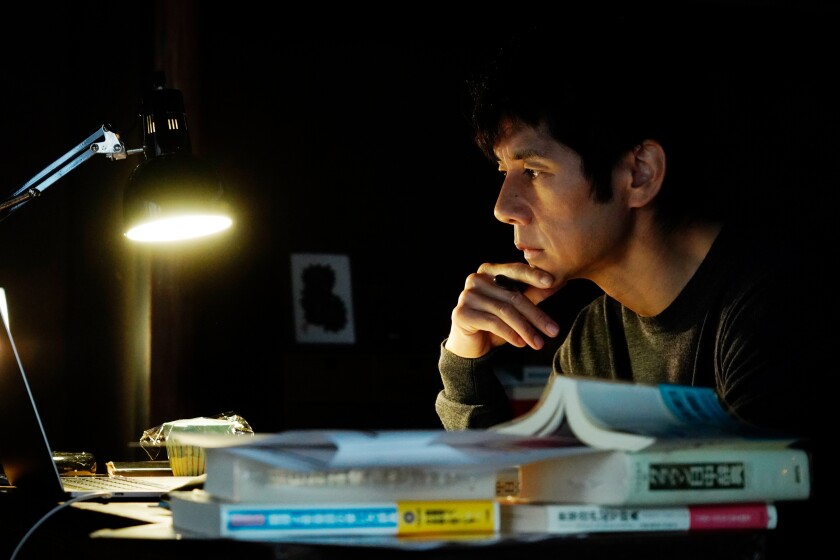 ‘Drive My Car’ deserves a best picture nomination. Will the Oscars take notice?

Then in late November came the Omicron variant, which crushed the theatrical market for adult-oriented fare just as it was struggling to rebound and forced in-person events to be postponed, scaled back or held virtually once again.

“To return to this sort of shutdown, it’s both unexpected and disheartening in a way,” Quinn said. “Because all the fringe benefits of going to a movie — the human connection you get from standing in line, going to dinner afterward, the discussion about the film — all that’s gone.”

“Just when things were sort of returning to a kind of normal, Omicron wiped out the Palm Springs film festival and other events that typically reinvigorate people after the new year,” said awards campaigner Lea Yardum. “So you’re just not feeling that excitement, which is understandable. I hate to say it, but I think voters are bored. Academy members are social creatures, and the last two years of isolation have sapped some of their interest and enthusiasm.”

With the usual awards season horse race more muted than ever, Angellotti believes film critics might have an undue influence on Oscar nominations this year. “They’re the only ones really talking about films,” he said with a rueful laugh.

The collapse of the Golden Globes has hardly helped matters. While the Globes have long been treated as something of an inside joke by Hollywood, mocked even by the show’s own hosts, the star-studded telecast represents serious business to the studios, which pump tens of millions of dollars annually into trying to secure nominations and wins. Heading into this year, some in Hollywood believed that the Critics Choice Awards, which had moved onto the Globes’ Jan. 9 date, could serve as a kind of stopgap. But those hopes quickly faded when the show was postponed due to the Omicron surge.

“Realistically, there’s not a lot of commercial viability for adult movies without the marketing prowess of the awards circuit,” said one longtime awards consultant, who declined to be named because of involvement with a number of Oscar contenders this year. “Regardless of what you think of the Globes, the loss of a show with 20 million global viewers is a huge loss for a certain kind of movie. There’s no swap for that. It’s a huge hole.” The best picture winner needs a screenplay nomination. Which movie might be in trouble?

Only seven times in Oscar history has a movie won best picture without a screenplay nomination.

Smaller, more idiosyncratic awards hopefuls that have stuck to traditional theatrical releases, like A24’s “C’Mon C’Mon” and “Red Rocket,” have been particularly hurt by this year’s dampened awards season. Yet splashier Oscar contenders have struggled to make a significant dent at the box office as well.

Despite starry casts and A-list-director pedigrees, Ridley Scott’s “House of Gucci” has grossed just $52 million, while Spielberg’s “West Side Story” has pulled in just $35 million and Guillermo del Toro’s noir “Nightmare Alley” has made only $10 million. Only one of this year’s likely best picture nominees, the sci-fi epic “Dune,” has grossed more than $100 million domestically, down from five 2020 best picture nominees that cleared that benchmark. (None of last year’s eight nominees came close to that number since theaters were closed for most of 2020.)

In this challenging theatrical environment, insiders say, streaming releases have a distinct advantage. “Compared to something that’s streaming and readily available, those linear movies — particularly the movies that skew older — are really struggling to create conversation,” said one awards consultant who is working on both types of films this year. “It’s one thing to turn on Hulu or Amazon or Netflix after dinner and watch ‘Don’t Look Up’ or ‘Being the Ricardos.’ That feels very different than saying, ‘I’m going to go to this virtual screening followed by a virtual Q&A.’ ”

As difficult as the last two years have been for Hollywood, some see signs of green shoots coming up from the parched soil.

Sony Pictures Classics co-President Michael Barker recently went to the AMC Lincoln Square multiplex in New York to attend a Q&A for his company’s documentary “Who We Are: A Chronicle of Racism in America.” Afterward, Barker popped into a theater playing “Spider Man: No Way Home,” which has been one of the few bright spots at the otherwise grim box office, pulling in more than $720 million domestically to date.

Cruz, who has won lead actress prizes for the film from the Los Angeles Film Critics Assn. and National Society of Film Critics, was told she didn’t have to attend, given the spike in COVID cases. She went ahead and afterward sent Barker a text, telling him, “It was electric in there.”

“She was so turned on, she wanted to do more,” Barker said, adding that they immediately scheduled an additional event with the actress. “When you love cinema, you want to be around others that share that same love.”

Other celebrations that are happening — like one for “Spencer” lead Kristen Stewart at the San Vicente Bungalows last week — have been reduced to low-key, small-scale parties, with attendees submitting their vaccination cards and COVID tests.

For now, while they yearn for the day when they can return to their usual campaign playbooks, weary awards consultants are soldiering on and hoping for the best. As one veteran strategist said, “You throw everything at it and see what sticks.”

“Usually, at this time of year I have a pretty good finger on the pulse of where everybody’s brains are at, and right now it’s hard to say,” Yardum said. “There’s a lot of great work and we’re doing everything we can to make sure that people see that great work. But still, being in a bit of a vacuum, you just have to hope academy members are taking the time to see it.”